As the two superheroes lay blinking in the light, Ellis thought they both looked slightly lost. Falcon Boy stood up, dusted himself down and offered a gauntleted hand for Ellis to shake.

‘Ellis, on behalf of ourselves, the town, the surrounding area, the country, the globe and the entire solar system, we would like to thank you very much for rescuing us.’ 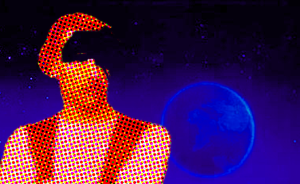 Falcon Boy thought that the time was right for him to sound dignified.

‘Indeed,’ he continued gravely, ‘I would like to think that your rescuing us will somehow be pivotal in preventing the universe from losing its long-established and fundamental equilibrium, and thereby falling into apocryphal disarray.’

Ellis wasn’t really sure what he was talking about and hoped that he wasn’t about to tell another joke. Falcon Boy was on a roll now.

‘Bewilder Bird and I are both convinced that Dr Don’t Know is up to absolutely no good, and that our being kidnapped is just the start of some kind of cunning and despicably malevolent master-plan to cause extensive chaos, wreak real havoc and generally make everything not very nice.’

Ellis wasn’t one for making snap judgements about people. She preferred to take her time and get to know them. Her initial impressions of the men were reasonably favourable but she did find herself feeling surprised at the sight of Falcon Boy suddenly standing stock-still like an old, wonky statue while Bewilder Bird flexed his biceps.