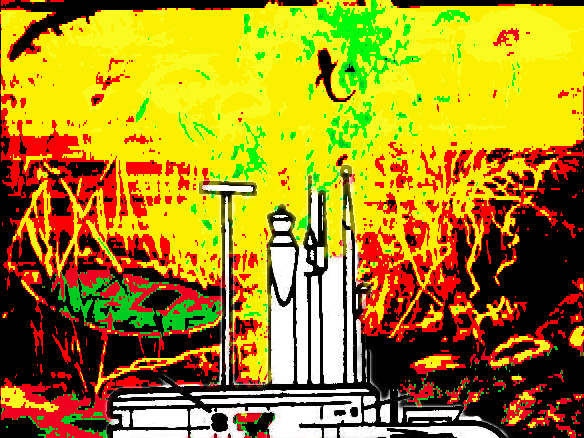 Straight away, I am sure you will agree that this is a terrible name for anything, let alone the sub-aquatic headquarters of an international master criminal down on his luck. However, in a spirit of team building that he has since come to regret on a daily basis, Dr Don’t Know ran a competition amongst the few employees he had left to name the vessel. The winning name was drawn from a hat.

Dr Don’t Know’s Submarine is a terrible name for the vessel but things could have been a whole lot worse if one of the other entries had been picked instead. Imagine if the submarine had been called Float Float or Crime Swim? What about Giant Swimming Flying Thing? Sea Sky 33? Dr Don’t Know’s Evil Underwater Submarine and Criminal Hidden Hideout Machine?

Dr Don’t Know’s Submarine constantly patrolled the waters of the world, hoping to avoid detection by staying partially submerged for hours at a time.

According to its operating manual, Dr Don’t Know’s Submarine can also fly short distances and be driven the wrong way down a motorway but no one, Dr Don’t Know included, has been brave enough to put this to the test.

Though it was converted to Dr Don’t Know’s specific specifications, the submarine doesn’t have the finest of finishes.

The doors don’t slide open with a beautifully silent whoosh. They stick when you try to slide them open and so you have to pull really hard and worry that you are going to rip them off their hinges.

There is no lift between the floors and the metal stairs are thin, wet and tortuously windy. You take your life in your hands if you want to carry a cup of hot soup from the galley on the fourth floor to the Mess on the floor below.

After years of rusty neglect, the on-board plumbing had only recently been repaired. Dr Don’t Know’s Submarine still smelled slightly of old singed vegetables, but things were far, far worse before the repairs. As you can imagine, it was incredibly difficult to keep the vessel submerged for long periods without flushing toilets.

Dr Don’t Know’s budget didn’t stretch to creating his very own supervillain’s super office, and he was forced to convert an old storeroom. His desk was an old packing case and instead of the kind of super-deluxe office chair finished in white leather normally available to the world’s criminal elite (complete with a long-haired purring cat), Dr Don’t Know has to make do with an old oil drum that hasn’t had all of its rough edges properly smoothed with an angle grinder.